The month of May means Crewe Live. We have been the official photographers to Crewe Live for four years now and we are very much looking forward to photographing this years music event.

To celebrate we are running a special offer on our band promo photography. The offer runs throughout the month of May and gets a full band shoot, either studio or location, for just £65!

We have photographed many bands both local unsigned bands and nationwide touring bands including: Elbow, Sham 69, Funeral for a Friend, Flaming Lips, Dodgy, The Bluetones, Human Condition, Son of Shinobi, Junker, Skeletal Damage and Kill The Doctor…

As well as being published regularly locally and online our work has featured in many nationwide magazines including a full page poster in Kerrang! We can help get your band some attention!

Here is some info on our music photography special offer: 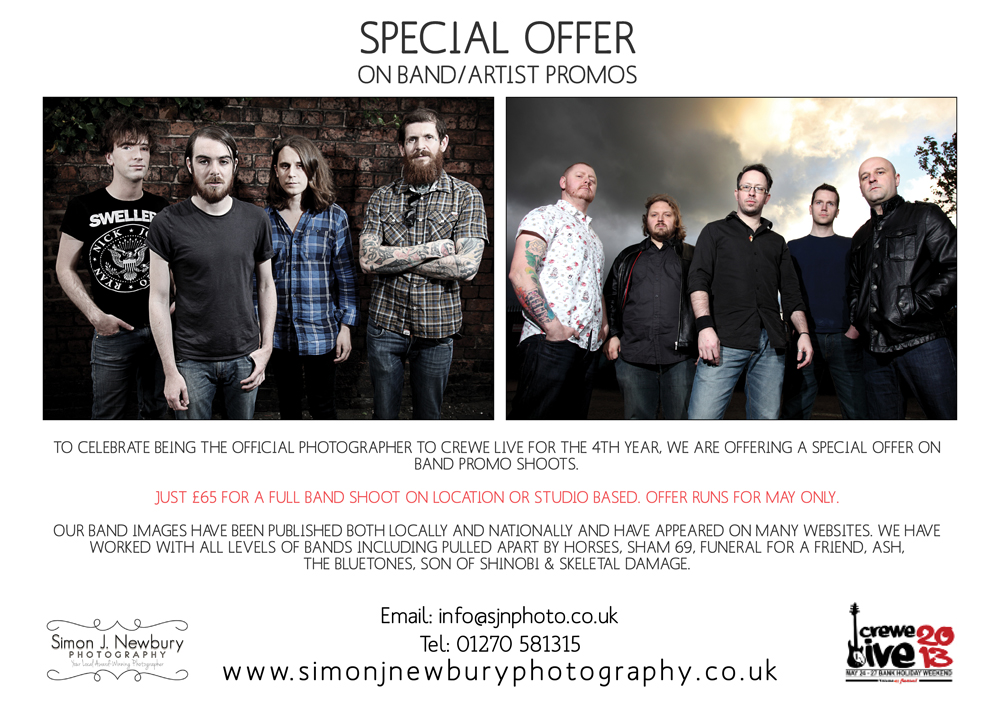 The bands on our poster are Pulled Apart By Horses photographed during last year’s Crewe Live and Son Of Shinobi.

Check out more of our music photography.

You may have seen or heard our new show ‘The Backstage Pass‘. Its a regular cloudcast presented by Simon and produced by Tina. We are both passionate about local live music and we are the official photographers to local music venue The Box as well as at Crewe Live. The show is designed to showcase local music as well as unsigned bands.

A big part of the show are the sessions. We record our acoustic sessions over at The Rising Sun and exclusive electric sessions are recorded at Project 9 Studio, in Northwich. The sessions are a wonderful addition to the show! We had the pleasure of recording the legend that is George Borowski. George is an amazing musician who has worked with the likes of Radiohead, REM, Tina Turner and Pixies. We decided that we would allow George to simply ‘take to the stage’ in front of a small invited audience and we would record the result as a special show. Special is not the word! Those that were there will remember the ‘gig’ for years to come! The show will be available very soon.

After the show we did a portrait shoot with George. The local landscape was perfect for the Urban Portrait series and so George is the latest person to feature in the series! 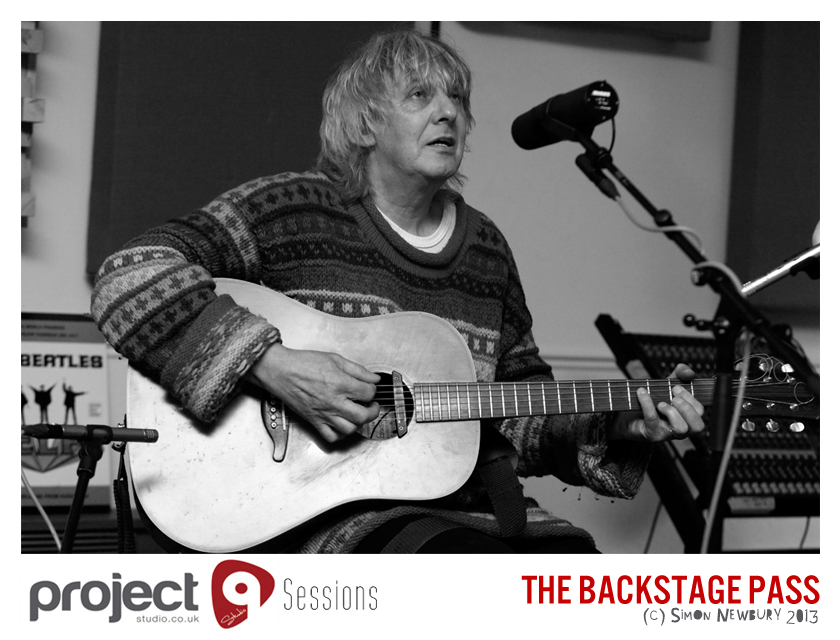 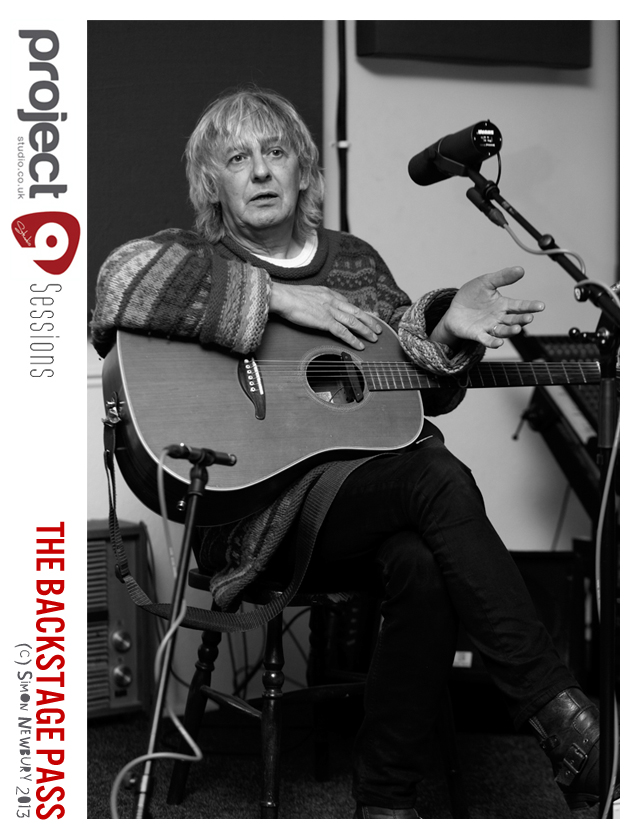 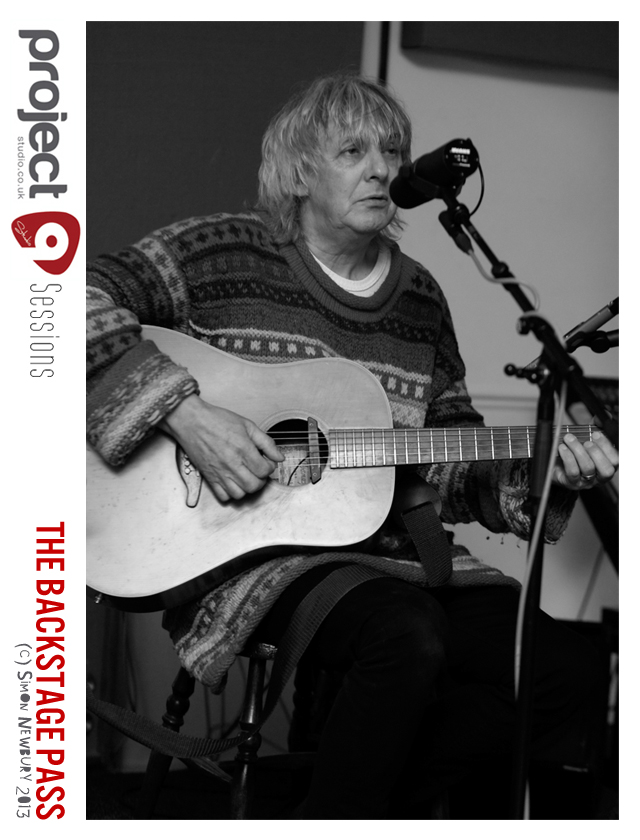 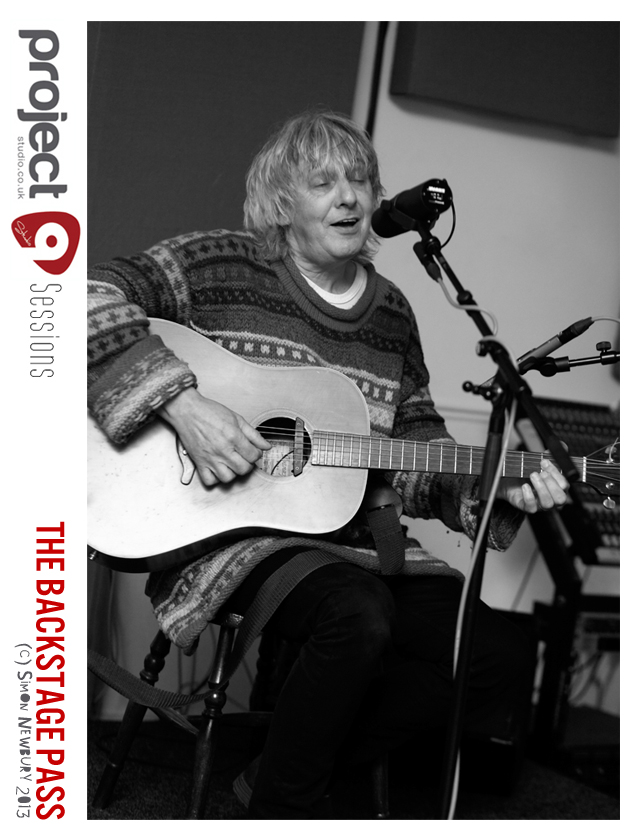 The Urban portrait of George Borowski: 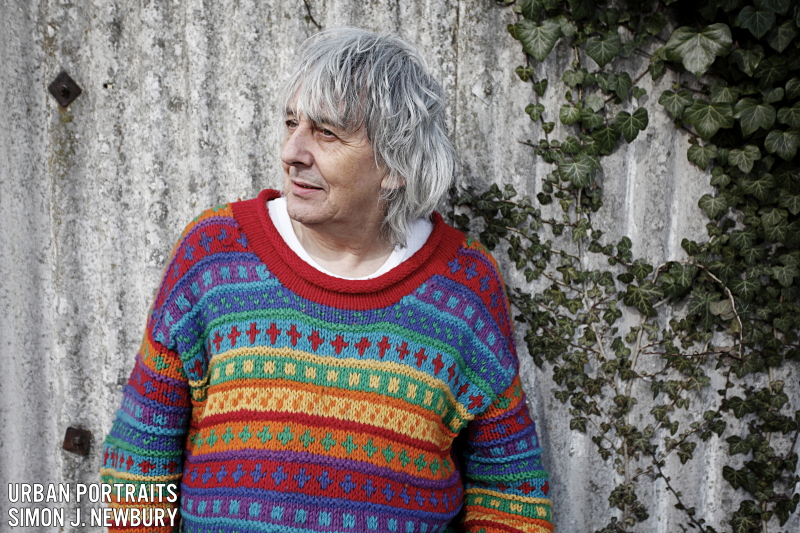 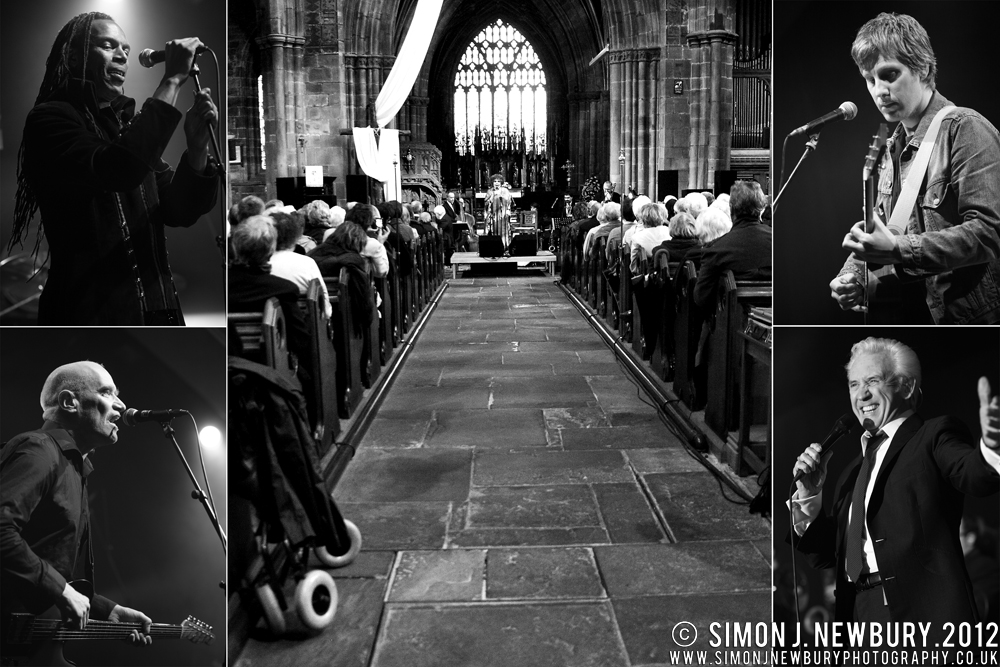 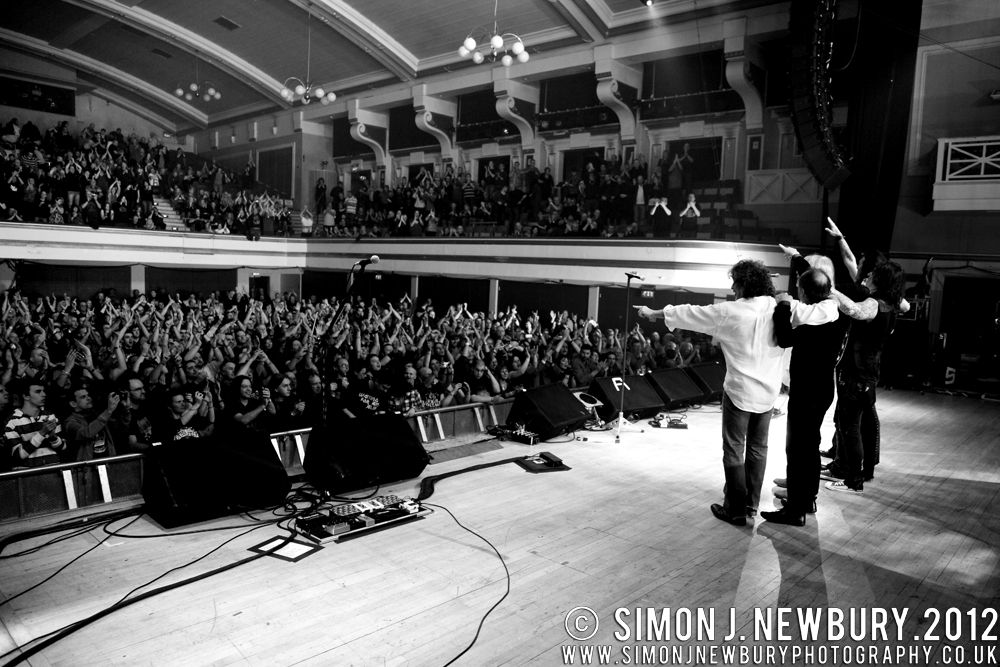 My urban portrait project is really taking shape! I’ve photographed 20 models in an urban setting mainly around the Crewe area so far. I’ve been overwhelmed by the amount of volunteers wanting to be a part of the project.

I am pleased that I have managed to organise an exhibition event which will be held at Bar 7, on Nantwich Road. The exhibition will involve a digital display of the images which are still being photographed right up to the event! I’ll be doing a talk about the project as well as a Q&A session. There will also be some great live acoustic music from Nick Bayes (the face of the project so far), Lee Garner, Al Dean & Tom Seals, Phil Maddocks and Sink Or Swim. It’s a free event and all are welcome! 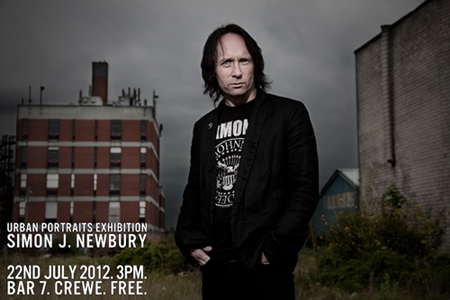 As well as the urban portrait project I have been photographing loads of bands lately. I am running a special offer on band promo photography leading up to Crewe Live 2012 for which we are the official photographers. 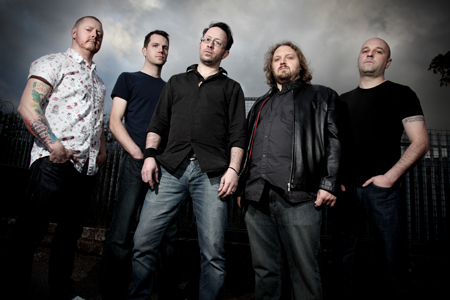 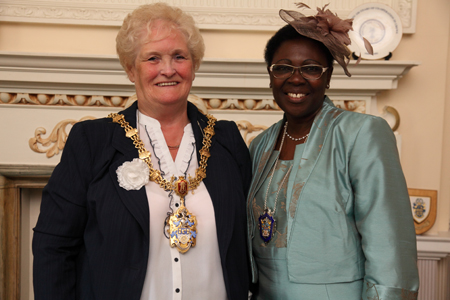 I’m also looking forward to photographing the Olympic Torch as it passes through Crewe on Thursday.

To register for the exhibition please visit:

Summer is approaching and as well as a busy wedding season we have the annual Crewe Live Festival to photograph. We have been chosen as the official photographer for the event for the third year running! This year is shaping up to be an amazing event.

Headliners include Ash, Pulled Apart By Horses and Hadouken! The event will be staged across 10 venues and the town centre and will involve over 100 bands.

To celebrate our third year as official photographer we are running a special offer on band and musician photo sessions. All the details can be found on our site: http://simonjnewburyphotography.co.uk/musicoffer/

We have been busy with shoots this week with Son Of Shinobi, Sink or Swim and Thick As Thieves all having shoots as part of the special offer! 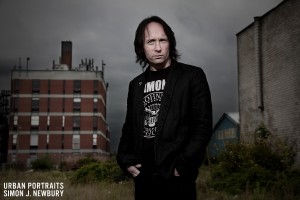 I’ve also started a personal project on Urban Portraits. I am going to photograph a series of people in an urban setting and maybe consider an exhibition at the end. It is proving to be a popular project as I have had over 30 volunteers already! 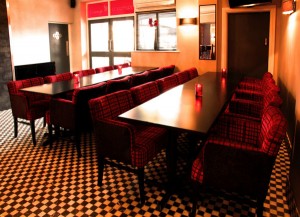 Meanwhile I have been busy undertaking lots of commercial commissions. I will be photographing some building exteriors for a construction company over the weekend as well as finishing up the hotel interior photographs for Firenze and The Cheshire Cat in Nantwich.

Following my request to photograph the Chairman of Nantwich Town, Jon Gold, and club manager Jimmy Quinn I was invited to become the official club photographer. I was delighted to accept this position and have attended every home game at the Weaver Stadium. I have also travelled to several away games and I am loving being involved with the club.

It’s certainly been an historic season. The club reached the 1st round proper of the FA Cup and were drawn away to Milton Keynes Dons at their new stadium. Although the scoreline was pretty harsh (6-0), everyone at the club had a great day out and the financial input from the cup run has made the world of difference to the South Cheshire club!

As a result of my involvement with the club I have been able to produce many portraits of many of the game’s luminaries. John Motson OBE paid a visit to the club and was happy to pose. England and Arsenal legend Ray Parlour was also a visitor to the Weaver Stadium. The Club’s Life President is former Chelsea and England star Frank Blunstone. Frank won the 1st Division title with Chelsea after moving from Crewe. He also went on to represent England. Certainly a legend and a great subject for a portrait! Another legend I photographed at the Weaver this term is former AC Milan and Italy sweeper Franco Baresi. Franco brought a charity XI to the Weaver along with a few other former Italian internationals.

Aside from the football I have been as busy as ever with my music photography. I have been fortunate to photograph at some wonderful events this year. The Crewe Live Festival was back after a year away and Tina and myself undertook to photograph as much of the event as we could. Spread over 12 venues and 4 days with over 150 bands playing it was no easy task! We managed to photograph 100 bands between us and had a great time. The festival was headlined by Funeral For A Friend and I was pleased to do portraits of the entire band as well as a promo shoot before they took to the stage in front of a packed Box!

The Cloud 9 festival near Sandbach was a wonderful one day event. Again Tina and I attended as official photographers and really enjoyed the variety of music on offer. Our good friend Sheena Bratt appeared with Nick Bayes guesting on bass and it made for some great photos. Over on the main stage Ed Sheeran was amazing. I was pleased to meet Ed and do a portrait. Also on the bill was Bez and The Futureheads.

The first ever Transmissions – Live from Jodrell Bank took place this year as well. The event was headlined by The Flaming Lips along with British Sea Power and OK GO!. A phenomenal event which was truly a visual treat. I entered one of my images of Flaming Lips front man Wayne Coyne into the NME professional photography competition and it finished in the top 20. I certainly hope that the event continues next year -its such a wonderful venue for such an event!

The very next day I headed off to Chester Rocks at the racecourse. They had a fantastic lineup! Tommy Scott (Space), I Am Kloot, Lightning Seeds, Australian Pink Floyd, Feeder, Leftfield and Iggy Pop & The Stooges. A great day in the sun and was amazed at the fantastic performance from Iggy. Came home with a wonderful set of images!

Also on a musical note I was pleased to do a portrait shoot with former Guns ‘n Roses musician Duff McKagan. Duff was on tour with his new band Loaded! We travelled to the Garage in London to do the portrait and capture the live performance. A late night but a music legend!