Last year I was fortunate to photograph The Flaming Lips and British Sea Power at Transmission 001 at Live From Jodrell Bank. This year saw the festival grow to a 2 day affair with headline acts Elbow and Paul Weller. Sadly the weather ended hopes of the Weller gig taking place. 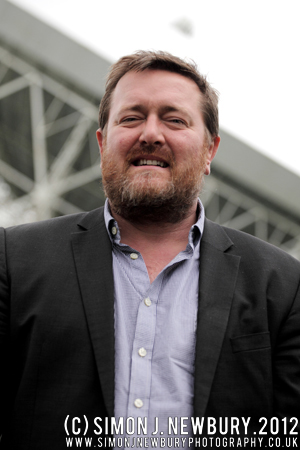 Guy Garvey, Frontman of Elbow. In front of the Lovell Telescope.

I was at the Elbow gig though armed with the camera on official business! A great line up saw Transmission 002 take off where last years event finished! I arranged a portrait shoot with Guy Garvey of Elbow in front of the dish which was a nice little shoot. I’ve got to say of all the backdrops I’ve used in my time the Lovell Radio Telescope is one of the most special!

The live music itself was really good and not at all ruined by the deluge of rain. It’s a shame that that rain ended any hopes of me photographing the Gomez, Graham Coxon and Paul Weller show the following day! Still, I got a nice set of images which I have shared on the Facebook Page.

Wedding season is truly upon us and I have 5 special days to document next month. I have a few weddings in North Wales as well as one in Crewe, and one at Old Hall in Madely, South Cheshire. I hope the weather is better than for the Elbow gigs as two of the weddings are outside!

As the new season approaches for Nantwich Town I have lots of work ahead getting the new player portraits and the new squad photo. I was at the Weaver Stadium this afternoon to photograph the new kit. A change of sponsorship and a new away strip will be launched very soon by the club. It’s exciting times at the club as manager Jimmy Quinn has assembled a strong squad for the coming season. A lot of new faces bring hope for a successful season. I’ll be at most of the matches providing action shots for the club and local press in my role as official club photographer!

My Urban Portrait Exhibition is really taking shape now, having photographed nearly 30 portraits. It’s been fantastic to have so many people volunteer to be a part of it. The majority of the photographs were taken around Crewe and the exhibition itself will be held at Bar 7 on Nantwich Road on Sunday July 22. As well as the photographic exhibition there will be some wonderful acoustic music to enjoy, all for free! I’m still shooting portraits for the project and hope to have a body of around 50 images by the time the exhibition comes about. I hope you can join me there!